How A Sheriff’s Office Became a Valued Community Staple 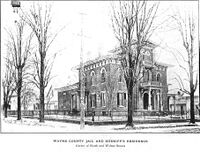 The Wayne County Sheriff’s Office and Jaol was claimed to be the finest law enforcement facility of its kind, unique to the state of Ohio. The construction of the building was proposed in 1864 following an approved plan for expansion of the Wayne County Prison System.

The Third Jaol of Wayne County was modeled after the finest prison of 1800s Cincinatti, and constructed with advanced ventilation and security for the time. It was built under the watchful eye of John B. France, acting sheriff.

During its active century as a jail, twenty-two men served as sheriff in our grand, old building, concluding with James Frost, who was the last sheriff to serve in the third jail and the first to serve in the new Wayne County Justice Center. Construction was finished in 1865, with work most likely concluding around September of that year according to Wooster History Scholar Harry McClarren. For over 100 years our site housed the police department and criminal population of Wayne County. It was the most robust jailhouse to be built in Wooster at the time, and served as the center of operations for the sheriff until 1977. This marked well over 100 years the building had stood, making it a great candidate for a historical site!

In 1977, the Wayne County Sheriff’s Department was relocated across the street to a new facility, leaving more than 100 years of stories behind– but not forgotten– as in 1979 Ye Olde Jaol was saved from the cranes and bulldozers by a group of historical preservationists led by Wooster’s own Mayor Robert Anderson!

By 1980 the building was registered as a historical landmark and would live to continue its stories in Wooster long into the future. During its time as a historic building it has housed a few businesses.

In the 1980s it was home to Mr. Bills Restaraunt, as well as a Victorian style eatery, and most recently changed hands in 1995 when the Jaol was purchased by a private business owner and resident of Wooster. Today it lives on as our fine eatery and tavern!

The Olde Jaol is a popular location for dark history enthusiasts– but often mistaken for the historical Ashland County Courthouse as the site of the LAST recorded public execution in Ohio.

We love correcting that misconception– and sharing the REAL history!

Rather than the site of the last recorded execution, the Jaol’s location is recorded as being the only site for a public-execution to ever occur in Wayne County– with the Jaol serving it’s only sentence of execution on December 3, 1880. This followed a 100-day stay of execution, after which the first and only gallows of Wayne County was erected in just 3 days time!

On a cold December morning, for the brutal murder of esteemed community member John Tormie, second-generation Irish-American John Callahan’s sentence of hanging was completed, much to the objection of many individuals within various communities.1

Visitors and workers of the Olde Jaol have reported what some could call “ghostly activities”.

The fine dining area of the Olde Jaol  was once upon a time the cell block. Said to be haunted by the only person ever to be hanged in Wayne County– he served time in a cell on the basement floor while above him in the courtyard he saw his looming fate growing over three days and nights.

Flickering lights, banging of steel bars and unexplainable calls to the tavern (in the former jail garage) from the dining phone are all blamed on his ghost. These happenings usually occur late in the evening or in the early morning hours.

Significance of the Tormie Family

Little is known of the life of John Tormie, he is best known as the father of Pearl May Early (born Pearl May Tormie).

Pearly May Early was an American actress and songstress in the early 19th century. The Wooster native was born to Tormie a mere year before the tragic passing of her father. This passing clearly only served to embolden her drive for life. In her career Tormie would become known as the number one act of the Musical Comedy Company at the Bijou Theater in Richmond, Virginia.

She would go on to marry John Early and perform as a duo with her partner until gracing the silver screen beside famous musicians such as Bing Crosby and Mary Martin, Louis Armstrong, Duke Ellington, the Dorsey brothers and Benny Goodman.

She starred in films such as “Lady for a Night,” a drama starring John Wayne; the comedic “My Favorite Blonde,” starring Bob Hope; and “In Old California,” another John Wayne flick. Not to be outdone by anyone however, she also devoted time to helping her country by selling war bonds during World War II.

Pearl May is truly one of the most iconic individuals to ever come from Wooster, and the world would seldom know if it wasn’t for the sacrifice of her father and a landmark decision that altered the history of Wooster forever!

Prefer to make a reservation? Give us a call!